You are here: Home / Young captain takes on important duty 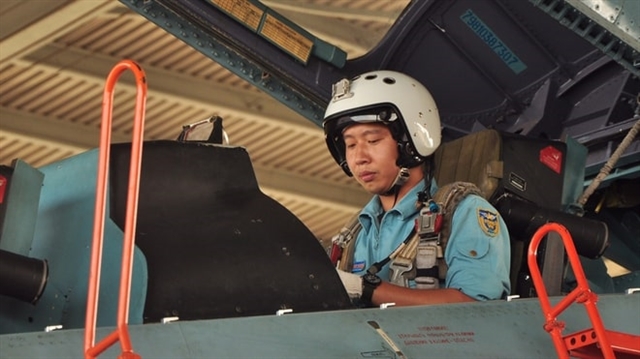 HÀ NỘI — Captain Nguyễn Quang Sáng of the Air Defence-Air Force will never forget the first time he accompanied a high-ranking delegation of the Ministry of National Defence to Trường Sa (Spratly) Archipelago to present Tết (Lunar New Year) gifts to soldiers and people there.

Before that, he was lucky enough to be among six young pilots who were trained for four years on Su-30MK2 aircrafts as part of Regiment 935.

The multi-role fighter Su-30MK2 is Việt Nam’s most advanced combat aircraft in charge of protecting the country’s airspace.

“I still remember when I dropped in altitude just 300m from the island, I saw people waving at us. Such a moving feeling,” he told Tuổi Trẻ (Youth) newspaper.

Now at the age of 31, Sáng is one the youngest deputy leaders of the regiment, which is the first group to use the Su-30MK2 and a pilot training institute at the Air Defence-Air Force.

Sáng graduated from Air Force Officer Training School in 2012 and was the first to experience trial training of the Air Defence-Air Force.

One of the first difficulties he had to overcome was to learn Russian so he could read the aircraft screens and understand vocal instructions. At school, the pilots just learned basic Russian.

“In the aircraft, everything must be done in a few seconds. There is no time for translation. We have to understand what the machine says immediately. The only way is to improve our language by ourselves.”

There are hundreds of buttons on the aircraft they had to get familiar with. The whole system will fail if one small mistake is made. The only way is to keep practising, he said.

“At that time, our classroom was the sky. There is no room for mistakes.

“We faced a lot of pressure. But pressure became our motivation.”

Sáng woke up at 4am to practise. In the evening after dinner, he spent time reading documents until midnight.

Efforts paid off as Sáng passed all of the tests and was entrusted on important flights.

Instructed by the most experienced teacher of the regiment, now Sáng continues to pass on his knowledge and experience to new pilots.

“I still remember what my teachers say: safety is everything. To ensure safety, we have to learn and accumulate knowledge on the ground. The pilots have to stay healthy, brave and uphold their spirit,” Sáng said.

Sáng has just finished level 1 training, the highest level for military pilots. If he passes the test, he will become a level 1 military pilot at a very young age. — VNS